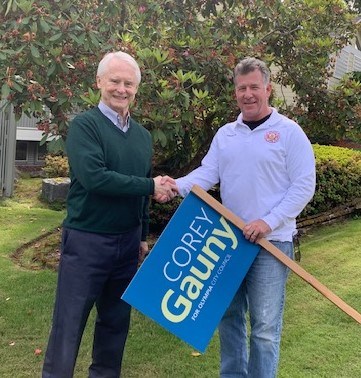 I am humbled and honored to have received the endorsement of the Thurston County REALTORS Association. This endorsement is a direct result of what I learned from Pacific Lutheran University Schools of Business and Economics. Thank you PLU!

Another great organization with the resources and vision to address the challenges of the affordable housing crisis in our community. Thank you for our endorsement Olympia Master Builders you are an amazing community partner.

I worked with Corey many times during my MBA program at Pacific Lutheran University and in India during our International Experience. We actually had the honor of getting to help formulate a clean up of the recently disaster ravaged area of Chennai at that time where we received recognition for contributions. I have zero doubts that he would do at least as much for our own City of Olympia. — Jason Borean

I worked with Corey in the USAF, and know he is of outstanding character, sound ideas, and support him for City Council. — Erik Vainu

Fred Carlson (Business owner). I have worked with Corey over the years on many different levels. He always has a positive attitude and applies everything he has to what he does. He is a problem solver and would make a great addition the Olympia City Council. — Fred Carlson

I've served alongside and maintained a friendship with Corey since 2004. I know him to be a consummate professional, dedicated to his colleagues and committed to quality. Corey understands the importance of hard work for the simple reward of knowing the job was well done. He is honest and down-to-earth, and he objectively researches all options before making decisions. I would be proud to have him represent me in local government, and I'm proud to call him a lifelong friend. Dr. Rachelle Nowlin Lt Col (retired) United States Air Force Associate Professor The Ohio State University College of Dentistry — Rachelle Nowlin

I worked with Corey for several years in the fire service. I know him both professionally and personally. Corey is results oriented servant leader, he follows through with a job to completion. He is an objective listener, life long learner and has always risen to the challenges placed before him. I am proud to know and endorse Corey in his run for Olympia City Council. — Brent Blasco

Corey sincerely listens to people and gives value to individual ideas. No matter where you are on the political spectrum you can grantee that your concerns matter. This kind of empathy is often missing in politics today, and you can rest assured knowing that Corey cares about the people in his community and will make decisions with honest intent and a genuine concern for all of his constituents. — Moses Jones

I know Mr. Corey Gauny from my previous work experience as a federal employee. Corey has a lot of natural talent and a long list of acquired skills, but he never let that go to his head. I appreciate his humble approach to problem solving. I have seen him in action many times. I was always amazed at his complete dedication to the mission at hand. Corey seems to have a magnetic attraction to difficult, complex and seemingly hopeless problems. They find him or he finds them. Extremely difficult problems cause most people to just walk away. But Corey just digs in and doubles down whenever a problem presents the highest level of difficulty. Olympia, like so many other cities currently face a long list of these extremely difficult problems to solve. I can’t think of a single individual as well equipped as Corey Gauny to tackle the problems we must try to solve in Olympia. — James Lee

Corey has my support for Olympia City Council. Olympia desperately needs a change in leadership for the benefit and health of the city, local businesses, and residents. — Ed Kunkel

Ed and I am happy to endorse a qualified experienced person to work for City of Olympia. Ed and Margaret Holm — Margaret Holm

My name is Phil Eckert, and I used to be part of the problem that the city of Olympia is trying so hard to resolve. I was one of those people that was homeless and struggled with addiction and lived in the jungle. I met Corey at a volunteer cleanup.. I was still in active addiction, but I wanted to do something to help clean up this beautiful city. When I met him and his wife Megan they greeted me with compassion, love, and curiosity. They wanted to know what they could do or what I needed to get out of the situation I was in. I kind of misunderstood they're angle at first. But it was extremely evident that Corey was genuine and caring and trying to get to the core of my problem. He also made it clear that he would not be willing to enable me in any negative way. Since then, I have gotten clean and became a productive member of society once again. Corey is passionate about this city and our community. I, Phil Eckert, a recovering addict, formerly homeless, with the help of Corey's compassion and caring, I am now part of the solution. I fully endorse him to be elected to our city council. Because I believe in his values, vision, and heart. He can and will change this beautiful city back to the safe clean place it used to be not long ago. — Phil Eckert

Made me excited to fill out the ballot! Finally someone running with an ounce of common sense! Supports police, rule of law, getting the homeless actual help instead of turning a blind eye! All I can say is wow! — Michael Herrington

Corey is the only candidate for position #6 that not only has the experience and the correct priorities to solve our most pressing challenges: homelessness, affordable housing and public safety but has taken the time to extemporize how he plans to solve these challenges. He has done so on his website and did so when I rang him up today. — Bob Brett

I've met Corey and there is now a glimmer of pragmatism for Olympia. Ever since I moved into the city, I've been disappointed with the approach to homelessness and law enforcement. Now there's Corey. — Treacy Duerfeldt

After meeting Corey, we are excited to endorse him for city council. He leads from the middle where there is the possibility for compromise to solve problems. His educational background and experience give him the skills needed on our city council to approach he issues in an effective way. Stephen and Mary Snow — stephen and Mary snow
MD

I am endorsing you because of some of your answers on the neighborhood forum. Please protect our trees and environment and most of all listen to the people who live here, and do not give away our needed tax revenue to the pass-through profiteers here for multi million dollar tax breaks. Phyllis Booth — Phyllis Booth

Thank you for signing up!